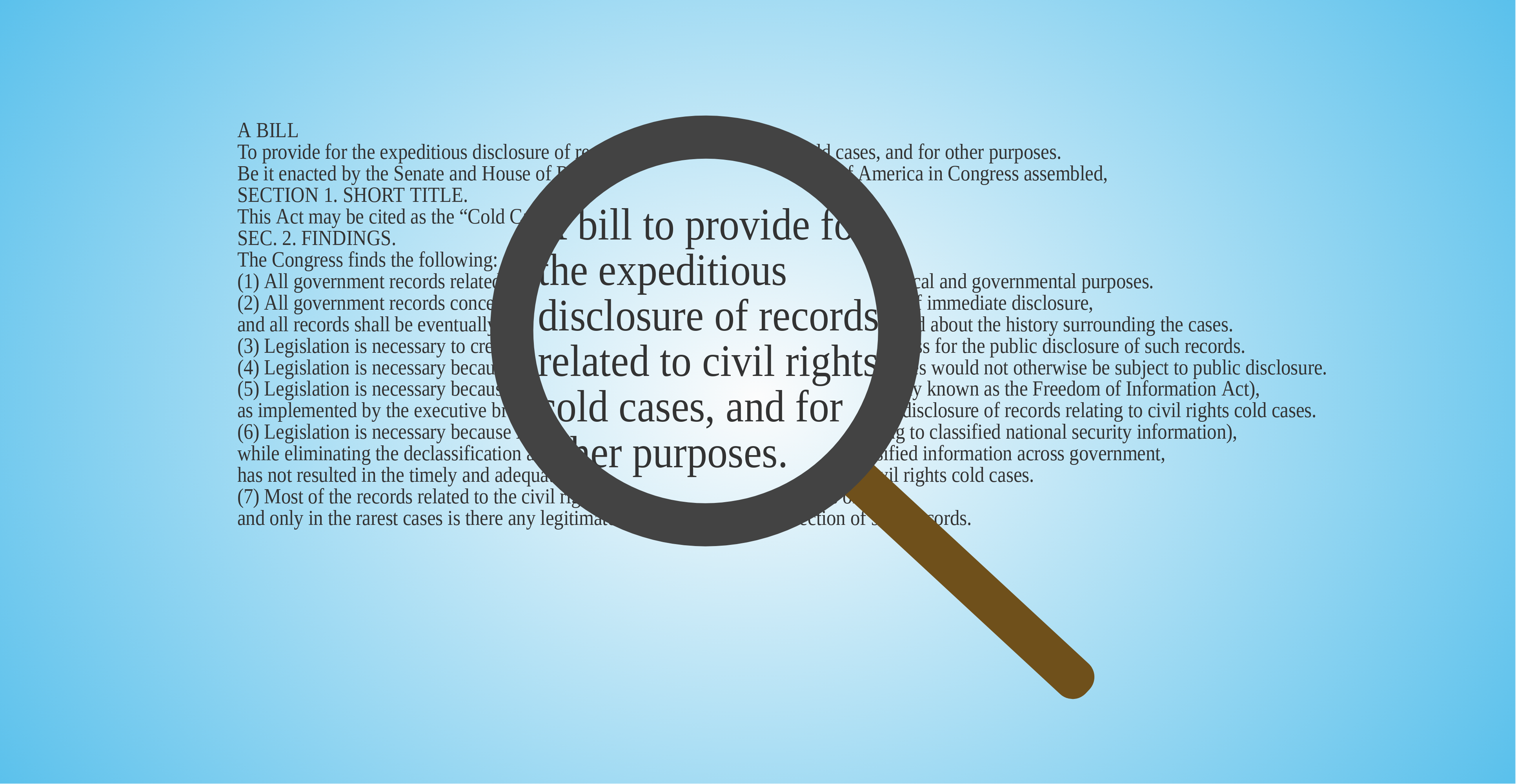 The Civil Rights Cold Case Records Collection Act, also referred to as the Cold Case Act, is a piece of legislation that seeks justice for the victims of civil rights-era cold cases. The bill would establish a review board to facilitate the release of documents surrounding these cold cases for use by the public, including journalists, private investigators, family members of victims, and students.

Why is this bill necessary?

At the same time, private citizens who are concerned with these cases have a much better record of finding answers. Due to severe over-redaction these private investigators can find themselves with little to no evidence with which to build cases when going through traditional channels such as Freedom of Information Act (FOIA) requests. The Cold Case Act borrows from a previous piece of successful legislation, the President John F. Kennedy Assassination Records Collection Act of 1992. The JFK Records Act set up a new, independent channel to disseminate documents efficiently and without the systematic over-redaction and long waiting times inherent in FOIA requests.

What are its supporters saying?

In October 2018, Senate co-sponsors Ted Cruz (R-TX) and Doug Jones (D-AL) published an op-ed detailing their support for the bill. “We are hopeful this legislation will add another victorious footnote to the legacy of the civil rights movement and allow the American people to seek justice for their countrymen who were wrongly persecuted for the color of their skin and their fight for equality,” the senators wrote.

Other congresspeople have published statements supporting the bill. Senator Claire McCaskill (D-MO) described the bill as “a step in the right direction when it comes to getting closure for the families and communities who have been victims of these racially-motivated murders.” Senator Kamala Harris (D-CA) also vocally supported the bill: “Transparency in our justice system is critical to ensuring trust between the American people and our country’s institutions. … More than 100 cold civil rights criminal cases from nearly 50 years ago stand to be resolved from allowing public access to these records, and we must allow the families and communities affected to have the opportunity for justice and to receive the peace of mind they deserve,” Harris said.

Where is the bill now?

Previously, it was introduced into the House of Representatives by Rep. Bobby Rush (D-IL) on Mar. 1, 2017. On July 10, 2018, the Cold Case Act was introduced into the Senate by Senator Doug Jones (D-AL). The Cold Case Act passed in the Senate on Dec. 17, 2018. It then passed in the House of Representatives on Dec. 21, 2018 and was presented to President Trump for his signature.

The Cold Case Act was written in late 2015 by students from Hightstown High School in New Jersey. Several dozens students, some of whom have since graduated, have continued to advocate for its passage. To our knowledge, the students of Hightstown High School are now the first high schoolers in history to have a piece of legislation enacted at the federal level.